I recently interviewed Rana Kay, the Director of Public Relations at the Hard Rock Hotel San Diego. In my introduction I told the story about how I keep my travel writing fresh by writing about my hometown, San Diego and surrounding cities and towns when I’m not on traveling to far off locations.  In the intro to the podcast episode with Rana I said I’d share a screenshot of an actual email I sent to request a hotel stay.  If you scroll down, you’ll find the email I sent to Hotel Del Coronado.

My son is in middle school, so I limit longer trips and scatter them throughout the school year and try to plan for my bigger travels during summer or school breaks, especially if he is going to tag along to write for the kids corner section of my travel website.

So, what I like to do is plan at least two local press trips within driving distance during the months I am not traveling. It’s a great way to explore your home town or nearby towns and keep pumping out articles. In the case of the Hard Rock San Diego I applied for a press trip listed on Media Kitty, but in most cases I reach out directly a hotel or to a Visitors Bureau if I want to cover a destination I don’t know very well.

If the story and destination lends itself to a family excursion I very often bring along my husband and son. Here they are at an olive harvest at San Miguel Olive Farm: 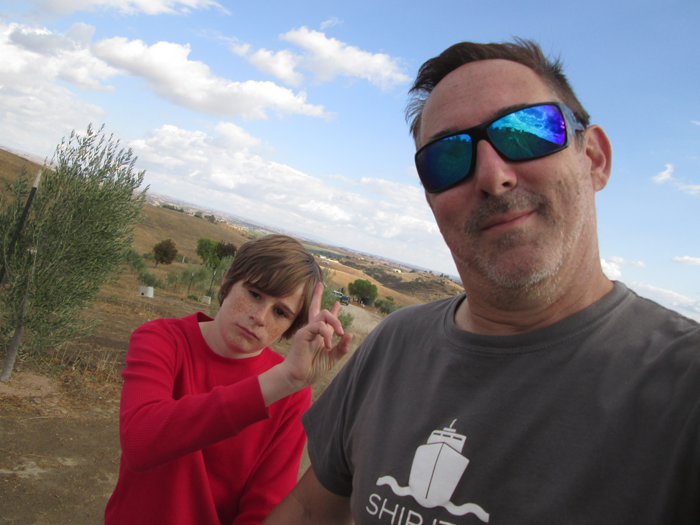 I’d like to say two things about this – 1) both my husband Todd and son Roland write for 52perfectdays.com. If I have a location or destination I want to cover – I’ll go to Todd and Roland. Show them a few photos and explain my ideas and give them the option to come along and write about it. That is my deal. Todd either has to create photo galleries or write an article and Roland has to write an article and 2) I always make it clear in my email to the marketing or pr rep that I will offer coverage from all three of us.

Here is a screenshot of my email to the Hotel Del Coronado requesting a stay. 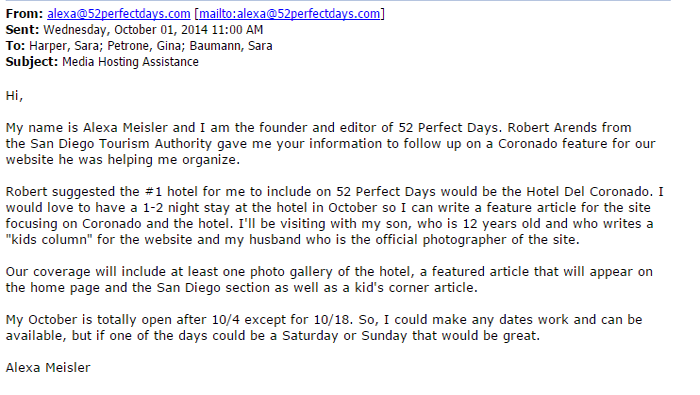 So, in the last couple months I’ve reached out directly to the Del Coronado Hotel (as you can see above) and worked directly with their marketing department to plan a visit. I’ve been to Coronado loads of times and I knew I wanted this story to mostly focus on the hotel itself as I feel like it’s a destination to itself.

I also recently reached out to Shae Geary from (W)right on communications which is the PR agency for the city of Oceanside and who is an upcoming guest. I reached out about a stay because I wanted to explore their booming beer scene. Robert Arends from the San Diego Tourism Authority spoke about the fact that San Diego is the Craft beer capital on episode #8 – which aired last Thursday. But, just north of San Diego, Oceanside has breweries popping up left and right as well as an up and coming foodie scene with some really delicious restaurants opening up like  Privateer Coal Fire Pizza, 313 & place we had dinner.  Ok, so in case you are wondering – my son didn’t join us for this trip – instead stayed home with my mom.

Other fun ways I enjoy exploring San Diego as a travel writer is by honing in on a certain neighborhood. My family and I had never been to the Whaley House in Old Town — which by the way if you have at least  a few articles published focusing on your city approach the visitors bureau and ask if they have a media pass for all the museum’s in your town. Then every week visit a different museum and write about it – great way to show the visitors bureau you can pump out content and create a relationship. So, my son was particularly interested in visiting what some say to be the most haunted house in America – and we made a day of it and then wrote about it.

Below are the links to the articles I wrote for the above stories as well as a few my son, Roland wrote for the kid’s corner for Coronado and Old Town and one Todd wrote on Legacy Beer in Oceanside.

The bottom line, is we are travel writers because we love to write and travel – so this sort of ‘stay-travel-cation-writing’ allows me to have a travel experience, be able to get to know new and interesting parts of San Diego County and keep my website up to date with new content.